Pictures and notes from Saturday's day at the K. 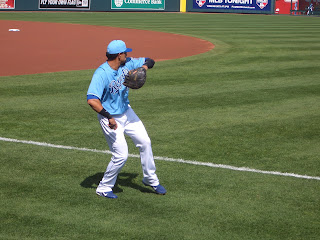 Before the game, I watched my boy Kila.  Here, he warms up with Chris Getz.
On Friday, Kila hit a walk off home run. I could hear it from our hotel parking lot as we pulled into town.  Pretty cool.  He didn't do a lot on Saturday, but the Royals pulled out the victory with an eighth inning rally.  My quick observations:
1. Soria looks locked in.  I could be mistaken, but I think 100% of his pitches have been thrown for strikes in his two outings.
2. Chris Getz can really play some defense.
3. Matt Treanor seems to be able to work a count and draw some walks.
4. Jeff Francoeur has lost a TON of weight!  I knew this going into the game, but seeing it in person was startling.  I'm not attaching any kind of value statement
5. Superstition goes a long way.  My wife and I are convinced in the power of a ROYAL blue ring we won at Coco Key. 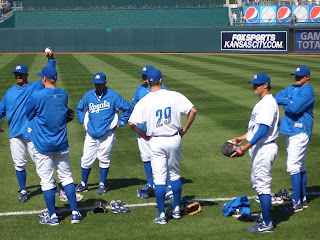 After the Royals game, their top minor league clubs squared off in a futures game.  This is the main reason we picked this weekend's game to come down.
I was caught by surprise when a bunch of guys in Royals jackets shed their coats and revealed Storm Chaser uniforms!  Guess we picked the right side of the field to be on! 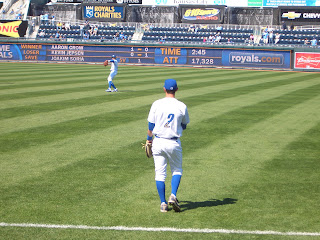 I was blown away by how cool the uniforms looked.   You may disagree, but I think these are world class.  Check out the lettering detail and color on the jersey numbers.  I think the colors really pop.  I think we're looking at Cody Clark here, evidenced by his number 2 and catcher's mitt. 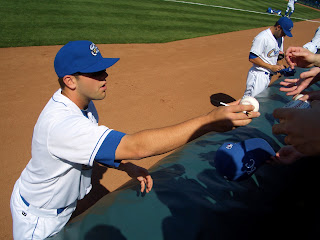 Guys were signing, and we were totally unprepared!  No pen, no custom cards, nothing!  I did have a Storm Chasers hat, but it was the black road hat!  Even the lid was black underneath.  So I made do, snapped up a ton of pictures and wished the guys good luck.  Other fans did the same (stuff like "can't wait for you guys to get here!") It was really fun!
The list of signers included Mike Moustakas, Eric Hosmer, Danny Duffy, Lorenzo Cain and Johnny Giavotella.  Some A listers for sure. 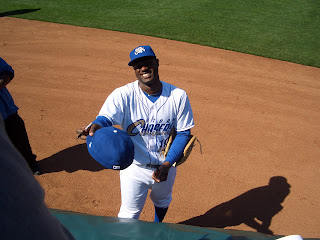 We did, however, graciously borrow a black sharpie at one point and get Lorenzo Cain to autograph my wife's Storm Chasers sweatshirt!  It came out beautifully, and he has a great signature.  Thanks to Lorenzo and the guys for being very good natured. 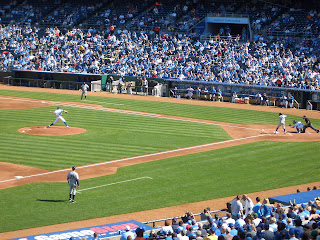 The futures game itself was downright awesome.  Mike Montgomery owned the day, throwing four no hit innings.  Looked poised and ready for AAA, which I was a little worried about going into the season.
One other funny tidbit is that Lance Zawadzki (the new Omaha Storm Chasers shortstop, acquired from San Diego I believe) is a nervous nelly!  In between pitches it's tic, tic, tic, nervous tic after tic.  Reminds me of Juan Gonzalez but even more so.  During the first inning that my wife noticed, we counted 32 crotch grabs and six hand licks.  In that half inning alone!  We got a late start on the next half inning too but still counted 46 crotch grabs and 11 hand licks!  46 crotch grabs!  Needless to say it will be fun watching him this year. 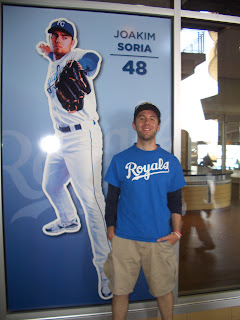 As always it was a fantastic time.  My wife and I both had a riot.  We both really needed a vacation, and even a mini weekend trip down to KC really did the trick.  Hats off the the K and the Royals.
Finally -- we're really looking forward to our first game at the new Storm Chasers stadium!
Email Post
Labels: goose joak photo blog