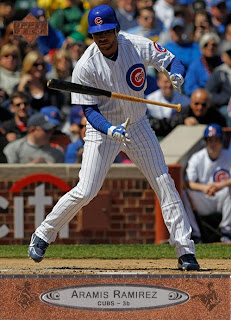 Aramis turned 32 last year.  Did he suddenly forget how to hit?

That 92 looks like an aberration to me.  Throw out his first half (injury?) and it was right on target: 132 OPS+ post All-Star break.

I'm not fooling myself into believing that Aramis is a top tier 3B, or that he is suddenly going to play 162 games.  But at a thin position, he's the kind of guy who I think is worth a flier.  Not a HUGE upside play for sure, but other than Alvarez, what is the upside play at 3B this year?  Compared to the possible waiver wire flotsam being drafted in his vicinity, I'd happily roll the dice on Aramis if he falls where I think he might.
Email Post
Labels: brand - upper deck goose joak baseball cards goose joak tributes player - aramis ramirez set - 1996 upper deck team - cubs year - 1996