This would be your second highest image result!  Crazy.  It is a card I featured at the Custom Card Blog but never posted here. 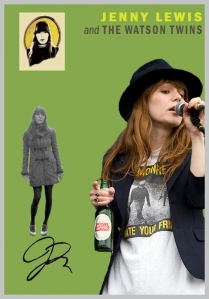 Jenny Lewis
Tribute to 1954 Topps
Jenny Lewis is one of my favorite musicians.  But she should know that Stella on tap is far superior to Stella in a bottle.  Hat tip to my friend Joe for that.
I've had a Paul McCartney in the works for several months but have yet to find the right inset picture for it.
Along those lines, here's a Hamilton I never posted at Goose Joak. 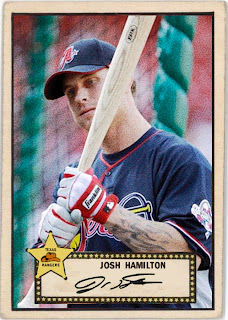 Josh Hamilton
Tribute to 1952 Topps
Today I finally bought a laptop enclosure for my old hard drive.  It had at least half of my cards on it.  If the drive still works, I should be able to dig back and grab every single photoshop template I've ever used, including these.
Anybody interested?  I think I'll post them to Google Sites for free.  I've got about ten people already signed up.  What I'd like to do is create an online resource for anybody who wants to do custom cards.  Other users would be welcome to add their Gimp/Photoshop/Whatever templates as well.  I know you're out there because I get emails every couple of weeks from people who are starting to do the very same thing!  Maybe collectively we'd get some really good coverage across different sets.
Email Post
Labels: brand - topps goose joak baseball cards goose joak tributes player - josh hamilton set - 1952 topps set - 1954 Topps team - rangers year - 1952 year - 1954