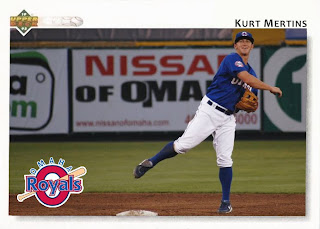 Kurt Mertins, Omaha Royals
Tribute to 1992 Upper Deck
by Goose Joak
Photo of Kurt Mertins is courtesy of Minda Haas.  Aside from Kila and Moose, Kurt was our go-to guy this year at Roosenblatt.  Word from the PR team is that he's a pretty nice guy, too.  We bid on and won a couple of his game used jerseys, with proceeds going to cancer research.  Side story, but somehow Tim Collins' pink breast cancer jersey went for $700 (that's $400 higher than Moustakas).  Mertins was much less than both of those, I can assure you!
Here's a picture from the final game, as we left the park. 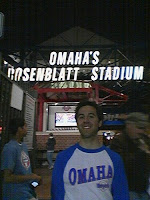 I look pretty happy in the picture.  I mean, it was a fun night.  I got to share it with my wife and parents, which was great.  That said, I choked up a little when we sang the seventh inning stretch acapella style (video at bottom, starting at 1:40).  Eesh.  You may have had to be there and grow up with it to know what I mean.
That said, I'm really excited about the new park! 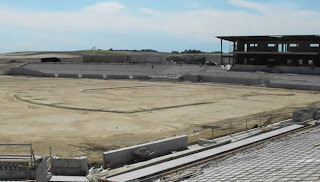