The Kansas City Royals have been bad for a while.  And their GM has been made fun of all across the saber-blogosphere for his public comments, trades and free agent acquisitions. 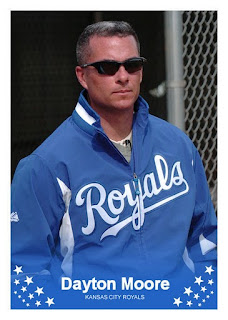 But as it stands today, the silver lining for Royals fans is that their farm system is getting to be quite good.  Maybe one of the best in baseball.  So maybe it's time we should begin to trust Dayton Moore process after all.

The more I think about it, the more his FA moves and public comments seem like a half-hearted attempt to drum up fan interest in the major league squad.  I mean, he can't come out publicly and decry what a poor team he inherited.  He more or less has to pretend they could compete, and at the same time he had a big league budget that he had to spend (political reasons to do this).  So he put together half hearted moves to acquire lackluster free agents.  And he had to pretend that Rick Ankiel will hit 40 HRs and Jason Kendall will outgrit the entire world.  But behind the scenes he's actually been architecting a legitimate contender and changing the culture of the franchise, biding his time for a few more years.  So at that level I really have no complaints whatsoever with his methods.  As others have pointed out, he really hasn't given away any talent -- EVER -- that's crucial to the success of the franchise.  You could argue Leo Nunez, but he's a pretty marginal closer.  You won't win them all anyway.

And, he's signed the two best players (Soria and Greinke) to extremely team friendly, long term deals.  Nothing to hate there. 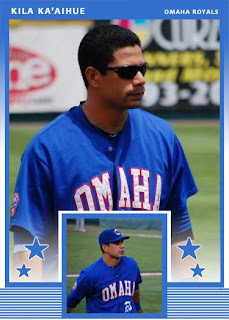 So long as Kila Ka'aihue finally gets his shot this year and next, I really can't complain anymore.
Consider me a Dayton supporter, so long as he lives up to where he has gotten us so far.
Email Post
Labels: goose joak baseball cards goose joak originals team - omaha royals team - royals