As a kid, my favorite player was Ozzie Smith.  He was the first player I knew in Major League Baseball.
One year for Christmas, I was lucky enough to get a perfectly centered Ozzie Smith RC.  I mean it -- PERFECTLY centered.  The corners were a tad worn, but the card was otherwise flawless.  And if you know the background behind the Ozzie RC, you know it's virtually impossible to find a perfectly centered card. In my eyes it was a one of a kind card.
In college, the Ozzie card was stolen.  As the single most important card in my collection, it was a tough loss.
I've searched to find a replacement for years but have never been satisfied with the centering.  That is, until this week.  Check it out! 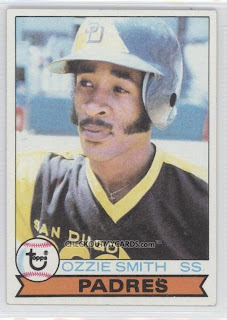 Granted, it's not a 100% perfect center, but it is dang close!  It's the best one I've ever seen, save for th eone I had before.

This leaves one single card left in my wishlist.  2009 Topps Zack Greinke (Black Wal Mart Border).  It retails for only $0.50 or $1.00 but is quite impossible to find.

I would also splurge on a Soria or De La Rosa bobblehead, were their teams ever to give one away.
Email Post