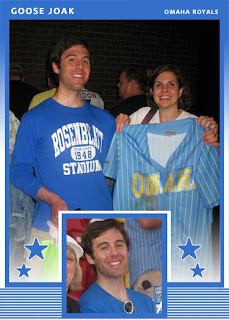 Goose Joak
2010 Goose Joak Original
by Goose Joak
I had an Omaha Royals birthday.  It was really fun.  The Royals won a 1-0 shutout against Nashville.  It's great since they are actually in a pennant race.  I guess that's what happens when you don't promote two of your best players in the organization.

Several times a year, the O-Royals wear special one of a kind jerseys and auction them off after the game.  This was either the third or fourth time I've been to such a game.  But it was the first time we tried to bid on one.  And we won.  On the card, you can see the game-worn and autographed Kurt Mertins jersey that we won in the auction for cancer research.  Hard to argue with $65.  We chose Kurt Mertins because he was the smallest guy on the team, and I'm a fairly small guy.  Definitely not baseball material.

Also, in the picture, you may notice some dirt underneath the "Om."  It was from a dive into second base, as Mertins was picked off by the opposing catcher!

Just an awesome day.  I owe a huge thanks to my family and especially my wife for making it so memorable.
Email Post
Labels: goose joak baseball cards goose joak originals originals - royals