If you can't buy a fantasy baseball ace (Zack Greinke)... 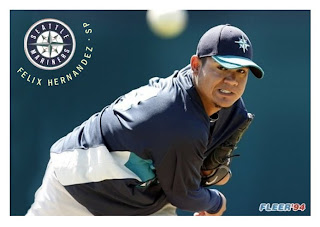 Pending a physical, Felix is set to become the newest ace of Maiden Correia.  The right hander will go the Correians along with the supremely talented Albert Pujols, plus a former All Star in Carlos Lee.  In return, Correia is said to have offered a solid package of elite corner players (Prince Fielder and David Wright) plus some bullpen relief in the form of Kevin Gregg and Huston Street.  Team mascot Scott Rolen will take over regular 3B duties for the Correians, with Chipper Jones slotting into CI and Carlos Lee slotting into the utility slot.

The line of thinking here is pretty simple.  Trade what little excess I have for need.  I'm first in saves, second in steals.  I'll quickly reload on saves (hopefully) in the form of Brad Lidge in about a week or two.  I'll lose some speed for sure but will be getting huge upgrades at batting average, plus equal or better performance in the other counting stats.  I hope.  If I get a net +1 to +2 on offense it's gravy.  And in the meantime I get a nice ERA/WHIP anvil in Hernandez to pair with the (hopefully resurgent) Dan Haren.  And fear not, if he continues to struggle, Steve Strasburg is waiting in the wings as well.  This provides the real opportunity, as I need some dead weight to throw on my bloated ERA and WHIP.  Thanks Felipe Paulino.