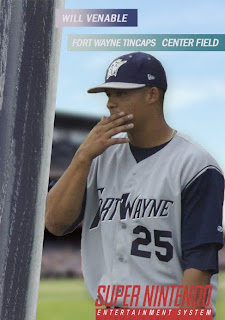 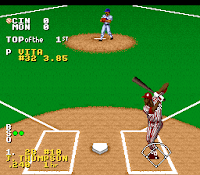 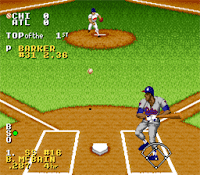 The game was just awesome.  For me, there was nothing else like it.  You could play an entire game in under 15 minutes, which was very important as a kid with a time limit on video games.  It had all the real stats and player abilities from 1993, and generally speaking, the players looked like their real-life counterparts.  Perhaps even more than baseball cards, that was what really got me to appreciate and learn about how the stats and players were tied together.  I played it in 1994, the year it came out, which was the same year I played my first season of fantasy baseball.  Between the two, I was in heaven!
I chose Will Venable for the card because I think his name would fit in the game.  Nintendo chose not to license the game through the MLBPA, so they couldn't use the names of the real players, other than Ken Griffey, Jr.  They did a lot of fun with this though.  The Royals were all ex-presidents.  The Cardinals were all comedians.  And so forth.  Venable's name makes me think of the world 'venerable' which for whatever reason I could see being used in this game.
1. CF #25
W. VENABLE
.314 11 HR
Thanks to Mom for spontaneously getting us the game at Toys R Us.  I still vividly remember that feeling of excitement on the first day we got it.  Lots of great memories.
Here is the card it is based off of, which came along with the game.

I couldn't find a clear signature of Venable's to mimic Griffey's, so I left that out.  I did a few other minor tweaks (didn't like the strange glow around Griffey's right arm, used a different Nintendo logo, and tweaked the name box so that it fit Venable's name better).  Other than that, it's pretty close!  Hope you enjoy.
Email Post
Labels: brand - nintendo goose joak baseball cards goose joak tributes player - will venable set - 1994 nintendo team - fort wayne team - padres year - 1994