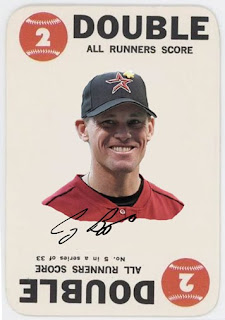 Short, scrappy and one heck of a player.  Fifth all-time in doubles.  Second all-time in hit by pitch.

As Bill James has said, Biggio was a phenomenal secondary player.  That is, he excelled at all aspects of the game that were either less obvious or harder to measure (GIDP, HBP, ISO-HR, baserunning, defense).

Never seen one of these in person but I like them!  If anyone is familiar with the set, I'd be curious to know if each player had multiple versions (i.e. Biggio Strikeout, Biggio Double, etc.) or if the outcomes were fixed for each player.  And furthermore, were the outcomes based on that player's tendencies (i.e. Aaron would be HR) or just random?  The choice for Biggio was pretty obvious.  That or hit by pitch.

You know, about fifteen years ago there was a similar insert in Collector's Choice.  At least, it was similar in concept, even down to the rounded corners.  But stylistically it was more Pearl Jam cover than baseball card. Wait, that's giving that album cover way too much credit.
Email Post
Labels: brand - topps goose joak baseball cards goose joak tributes player - craig biggio set - 1968 topps game team - astros year - 1968