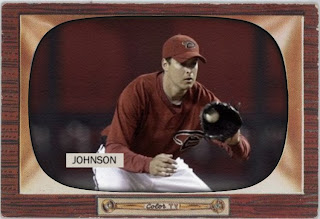 Kelly Johnson, Arizona Diamondbacks
Tribute to 1955 Bowman
by Goose Joak
Breaker of hearts around the world.  He's also your National League home run leader with nine.  As a member of yours truly's in the Fantasy Baseball 365 league (team name Maiden Correia, thanks Val!), he and Olivo are about the only ones who aren't doing some serious soul searching.  That said, we climbed out of the cellar this week.  Now in eighth.  I still like our chances.  We still plan to Sor-ia into first place by season's end.  I won't be satisfied with anything but a first place finish.

Anyway, back to Kelly Johnson.  He's due for a correction in the power department.  Why?  Luck.  He's hitting a home run with 33% of his fly balls.  Last year nobody topped 26%, and those guys were what you'd call "the big guns" (Howard, Reynolds, Pena, Fielder).

That said his BABIP is low (.250), so he might keep his overall value pretty steady.  He's not set to fall off a cliff, anyway.