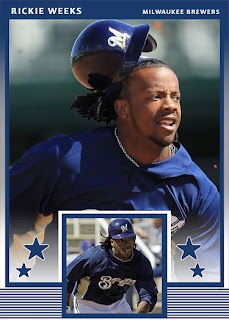 Rickie Weeks
2010 Goose Joak Original
by Goose Joak
Based on the Saponara league.

All four of these guys come with major baggage, but offer huge upside.

Miguel Olivo - Olivo rates pretty nicely if he were to win the job from Iannetta.  Which is surprising to me, since Iannetta is a superior baseball player in real life.  Amazingly, Olivo rates as a top 3 catcher, provided that he were to play a full season.  +9 HR, +2 SB, +12 RBI and +5 R over replacement, after adjustments.  Only thing he doesn't do is hit for average, and really, we're talking a .263 adjusted projection versus .267 replacement level.  No big deal.

As they are fond of saying at Razzball, Olivo would seem pretty yawnstipating.  But the data says otherwise.

Eric Young - The Rockies are chock full of great fantasy players...who happen to be stuck behind other great fantasy players.  Eric Young is the best example.  He projects as a top 40 hitter if he were to accumulate a regular season of play.  Of course, his value goes down significantly as a AAAA callup, supersub or spot starter.  Young's entire value comes from runs +20 and steals +29.  Over a full season he would hurt in other categories but net out at a +5% VORP player.  Very good.

Rickie Weeks - Toolsy player who has done a little bit over everything well, but never at the same time, and never for a full season. A very different player from Eric Young, but nets out at about the same value.

Jose Reyes - Ultimate risk versus reward.  You could reach for him in rounds 2-3 and get tremendous value, but you could also destroy your fantasy season by not taking a sure +10% vorp player.  You can hedge your bets at SS with an outstanding class of undervalued picks late in the draft, but the real opportunity cost here is missing a guy like Justin Upton, Matt Holliday, Mark Reynolds, Carl Crawford, Ryan Howard, etc.
Email Post
Labels: goose joak fantasy baseball goose joak originals originals - brewers