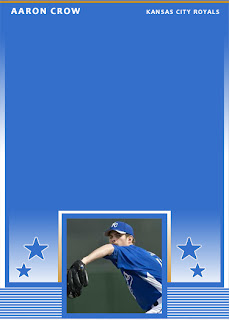 Aaron Crow, Royals
2010 Goose Joak Original
by Goose Joak
Nerd warning!
Ok, with that out of the way.
I have assembled a "VORP" system for fantasy baseball.  You basically:

Got it?  Granted, it's still highly dependent on projections, and I wouldn't use this tool blindly.  But it does reveal some fun findings.
Here are a few nuggets I can share right now, based on my keeper league format.
The top three players are:
1. Hanley Ramirez (52%)
2. Joe Mauer (38%)
3. Alex Rodriguez (33%)
There is another catcher in the top 15 overall players (I was surprised).
The system does a really good job showing how valuable top tier talent is.  For instance, the true value of Hanley Ramirez is HIGHER than Miguel Cabrera, Grady Sizemore, Mark Teixeira and Justin Upton...combined!  I believe this because my brother had a stars and scrubs style roster last year with his team, and almost won with it, despite having only three hitters who were really above replacement level.  This helps validate his approach and results.
This utility also comes into play when planning your team.  For instance, better to reach on a +20% OF now and save yourself from having to use three spots early on highly touted +7% guys to make up the difference.  This really becomes interesting when you see +7% guys in the early rounds (3-6) and +5% guys at the end of the draft.


Anyway...fun stuff if you ask me!  Now I've just got it convert it for my other draft next Tuesday.  Should be fun!
(And by the way, I don't do this for pitchers.  I pretty much exclusively look at K/9, BB/9 and GB%.  That's about it).
And speaking of which...I am BUYING on the early Strasburg hype.  He induces so many freaking ground balls in addition to the strikeouts this Spring.  I had no idea!
Email Post
Labels: goose joak fantasy baseball goose joak originals originals - royals