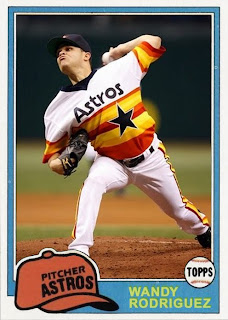 Participated in my first mock draft of the year, and thought I'd share the results!  Mostly did this off the cuff, using one Excel spreadsheet to help cue some names.

Standard 5x5, projected to finish third using MDC's projected stats.  So not too bad.  I usually make 100+ transactions per year though, so I always take projected stats with a grain of salt.


I was astounded at the quality of pitching I could get near the end of the draft.  I drafted nine starters, heavily back loaded (rounds 9, 13, 15, 16, 18-23) and wound up with the second best projected staff in the league.  And that's without taking into account my Cy Young aspirations for Felipe Paulino!  For some reason they had him tabbed as a RP.  Ha!

Overall I would feel pretty good with this squad.  I would need a stunt double for Chipper Jones at 3B if this were a real league, and I'm really low in batting average (I am way too used to OBP).  So that will take some practice as I gear up for FB365.  But overall very happy!