Tribute to 1993 Cracker Jack 1915 Reprints - Brian Buchanan, the Greatest Relief Pitcher in the Entire History of the PCL Brian Buchanan, Omaha Royals
Tribute to 1993 Cracker Jack
by Goose Joak
Outfielder, designated hitter and mop up reliever for the Omaha Royals. An absolute favorite of mine. He's pitched eight innings over the last two seasons, and guess what, he has a 3:1 strikeout to walk ratio! Got to see one of those outings live and it was awesome. He put up a scoreless frame.
At this point, "Buch" (Byouuuuuuuuuk) is 36. I just think it's awesome how he's hanging out and playing the sport he still loves. In a recent minor league set, Buch posed for his photo as a pitcher. If I find the card, I'll show you. How cool is that?
The guy was actually a decent major league player, with an OPS+ of 102 in 346 career games.
Hope he's back next year!
[Edit 11/12/2009] - I found the card of Buch pitching. Courtesy of http://aardvarktradingco.wordpress.com/ 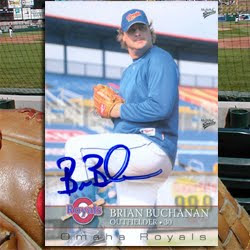