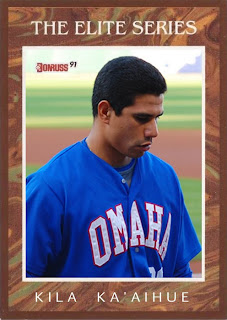 Kila Ka'aihue, Omaha Royals
Tribute to 1991 Donruss Elite Series
by Goose Joak
Kila took the minor leagues by storm in 2008. Had a .463 on base at AA, then .439 at AAA Omaha. With that skill (i.e., not making outs), you'd think he be on the fast track to Kansas. But not so fast my friend.
He maintained a .392 on base in 2009, despite a 60 point drop in batting average. Could they use that at Kauffman? Guess not.
To that end, I'm not quite sure what's going on with the Royals this offseason. Other than Zack Greinke, I think they really are trying to sabotage the team. They traded Mark Teahen, which is fine, but not quite sure what they're doing with another middle infielder and third baseman. More than anything this forces Aviles down on the depth chart, possibly even back to Omaha. Also, there are whispers that Alberto Callaspo is on his way out the door, possibly for a backup catcher. Again, this probably forces another decent player (Brayan Pena) back to Omaha. Not quite sure why.
But I should look on the bright side. Getting to see Kila, Aviles and Pena in Omaha again would be sweet.
Email Post
Labels: brand - donruss elite goose joak baseball cards goose joak tributes player - kila kaaihue set - 1991 donruss elite team - omaha royals year - 1991