Welcome aboard, Chase Utley! Tribute to an oldie -- '63 Fleer 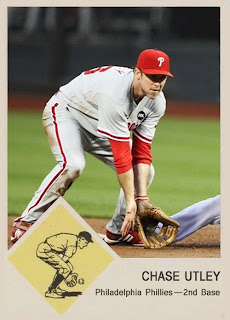 Welcome to the squad, Chase! It took a three-way trade to pull it off, but I was able to acquire Chase Utley. I gave up a lot, and was actually advised against making the trade, but in the end I stuck by my guns. I've been trying to get him for two years, and the timing was finally right.

Here's how it went down:

I know the Matt Kemp fans of the world aren't going to like this...but hear me out. In our league, we have smaller rosters than most (3 OF instead of 5), plus we don't have an extra MI position. Because of this, quality replacement outfielders are easier to come by than in most leagues. So that's one thing.

Also, the ability to replace a "dud" with a "stud" midseason is usually driven by two things (aside from luck): quantity and opportunity. Luck is obvious. When I say "quantity" I'm referring to the number of available players at that position. The larger the pool of quality players to draw from, the better chance you have of landing a good player. In our league, that's usually the case with OF versus middle infielders.

Finally, "opportunity" means you have a soft spot in the lineup that needs correcting. Since I had Hanley Ramirez last year, I wasn't paying much attention when Ben Zobrist set the world on fire at SS. So I missed out. Ideally you want your opportunities to align with your needs. OF offers a greater chance at this because you'll have a larger pool of quality players to draw from, and you lessen your chances at getting stuck with a poor MI with limited resources. When Mike Fontenot, Mike Aviles and Ian Stewart sucked last year, I had a hard time finding a good replacement. Not until Alberto Callaspo and Chris Coghlan came along did I manage to tread water in that category.

The lesson to be taken from all this, I suppose, is that it's easier (and more likely) to replace a bad OF with someone off the wire than it is a bad MI, particularly in our league. So in choosing Utley over Holliday/Kemp, I'm opting for the BEST 2B in the game, plus limiting my midseason risk of pulling a dead weight.

Some may not like it, but hey, I've gotta take the risk! It gets me back to have a nice MI stud, having traded away Hanley to chase my title dreams in 2009 (which I achieved).

So far, no word yet on anybody dropping out of the league for 2010, but I'll let people know if that does happen. One thing that's nice about our keeper league is that I've structured it in such a way that you can compete quickly. You can take over a poor team and emerge. In 2008, for instance, somebody took over a last place team and finished second. In 2009, somebody again took their last place team and finished a half point away from tying me for first.
Email Post
Labels: brand - fleer goose joak baseball cards goose joak tributes player - chase utley set - 1963 fleer team - phillies year - 1963