If John Buck is in your Hall of Fame, then John Mabry is my MVP. A fitting tribute in the form of 1991 Donruss awaits for your enjoyment: 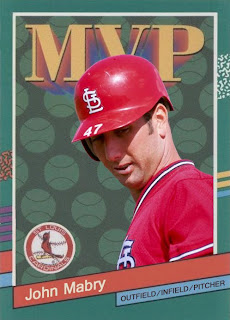 Last summer my wife saw a sign at Kauffman with the words, "John Buck is in MY Hall of Fame." First of all, wow. We know that John the stout is a man among boys, perhaps a god among men, but that is high praise indeed. Secondly, it must have been Hall of Fame weekend.

Either way, that about sums up the way I feel regarding John Mabry. The guy was never more than a regional favorite, if even that, but for a number of years he was my favorite player. I guess he represents the dark years between Ozzie Smith and Joakim Soria. If anything, he did play every position except for middle infield and catcher (and that includes pitching, twice).

Mabry's other claims to fame:

- Slowest non-catcher in the majors (according to Peter Gammons)
- Best outfield arm (American Association, '93 or '94 I believe)
- Hit for the cycle in order (second Cardinal to do so)
- Predicted to have the highest slugging percentage of any player during the 2007 fantasy baseball season (ESPN...weird)