Bring on the World Series

Unfortunately, the Royals won't be playing in the 2009 World Series. However, it is shaping up to be an exciting match up for baseball fans. I'll be watching (or listening) for sure.

Who are you rooting for? I'll be rooting for the Phillies. Their players are very likeable.

Regardless of who you're rooting for, it strikes me as one of the best Goliath versus Goliath matchups in recent World Series history. There's a lot of star power on both teams, both on the mound and across the diamond.

The first two games could be a real treat.

Does it get much better than that for an opener?

As for the Royals, maybe 2010 holds better things in store. I can dream about an infield of Gordon-Callaspo-Aviles-Butler and pretend that it can somehow compete with the likes of Feliz-Rollins-Utley-Howard. 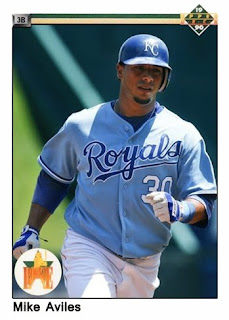 So if everything broke well, what could next year's lineup look like?

I don't think the infield is THAT bad, but the outfield will need some work. For better or worse I think Callaspo and Aviles are at least exciting players capable of a 110 OPS+. Butler is a legitimate player, and I think Kila could put up an OBP heavy OPS + of 100 or so if given a chance.

The thing about the Royals is that not only do they lack talent, but they often bench what little talent they have. Brayan Pena could be a great full time player, as could Kila, but we won't know unless management plays them.
Email Post
Labels: brand - upper deck goose joak baseball cards goose joak tributes player - mike aviles set - 1990 upper deck team - royals year - 1990