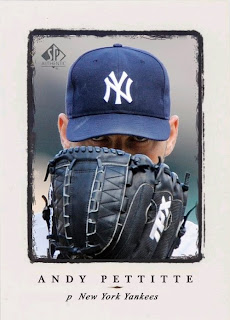 If you grew up watching the Yankees on Fox, then you should be plenty familiar with this image of Pettitte. I can only imagine they showed this zoomed in picture of Pettitte at least ten to twenty times during today's game.

Speaking of Fox, do you like their coverage? I'm not a huge fan. But I have a theory. This theory is called: Joe Buck doesn't like baseball. Maybe he does, I really don't know. But either way, I've really been enjoying the radio broadcasts of this year's postseason. For me, it harkens back to the 1997 World Series, when Omaha was caught in a massive snowstorm that knocked out our power for a week. I remember listening to game 7 of the classic Marlins/Indians series by candlelight, huddled under blankets in my parents' kitchen.

Maybe it's just that nostalgiac feeling, but for me, I haven't lost anything by enjoying this year's games on MLB Radio.

So -- back to the card. I'll admit, I'm not the biggest Pettitte fan, and admittedly I'm not a Yankee fan (though I do like Mariano). But I liked the iconic feel of this picture, and it's also making good on a reader suggestion from a few months ago.
Email Post
Labels: brand - sp authentic goose joak baseball cards goose joak tributes player - andy pettitte set - 1998 sp authentic team - yankees year - 1998