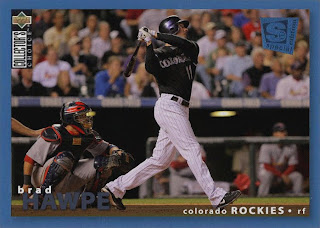 1995 Special Edition! This is one of my all-time favorite sets -- seriously, I mean it. In addition to the cool blue border, it has some of the best parallels that existed at the time, "silver signatures" and "gold signatures."

Speaking of the years I collected, it is interesting to see that reflected in the tribute cards for this blog. Take a look below:

Of the 1990s, my sweet spot is 1991-1993 (42). Which is totally true -- those were my favorite years of collecting. I suppose that's why I liked Score and Collector's Choice so much. They hearkened back to that era of collecting.