It was a wonderful day

A couple of weekends ago, my wife and I went to a Rockies game. It was one of the most enjoyable times I've ever had at a ballpark. To start with, I had a great buddy to go with. There is nothing like taking in a ballgame with family and friends.

Secondly, the ballpark is just stunning. I'd been there once before, for the 1998 Home Run Derby, but this was the first time for a baseball game. We had great seats, but walked around a ton, particularly when the Rockies were up to bat. I quickly fell in love the "yellow line" system they have, which basically indicates where it's ok to stand and watch the game from the concourse (which is basically everywhere). It's great. You get a phenomenal view of the game, and you don't have to worry about getting shooshed by an usher. Plus, it's far enough away so as not to bother people in the stands.

The game itself was fantastic. Jorge De La Rosa was pitching. We had seats out in right field (for Brad Hawpe, of course). De La Rosa was erratic but gave up just two hits and got the win. Seth Smith hit a couple of homers, and a few other Rockies went deep (Carlos Gonzalez -- big day for my wife's fantasy team). Chris Young hit three homers for the Diamondbacks, which was completely random. Brad Hawpe didn't do much, but we had a fun time watching him.

Strangely, the Rockies Stadium was completely sold out of Brad Hawpe apparel. No jerseys, replica jerseys, T-Shirts, pink T-Shirts, youth shirts, baby shirts, anything. The other strange thing was, we saw maybe two or three people total wearing Brad Hawpe stuff at the game. I mean there probably more people wearing David Nied shirts than Brad Hawpe shirts. Either way we both got matching Hawpe shirts at a local sporting goods store.

Below is a picture from the game. I didn't take many pictures at the game, so this one was borrowed from the Yahoo box score. 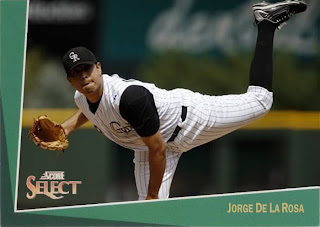