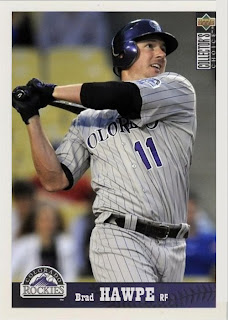 Who was on your All-Star ballot? Brad Hawpe was on mine. I think he's very deserving.

Unfortunately they don't let you vote for pitchers. So no, I wasn't able to cast a vote for Joakim Soria. Disappointing as usual.

I cast one write in vote this year: Ben Zobrist.

If I were to pick this year's Home Run Derby field, I would really want to see Ichiro do it. He might win. From a raw power perspective, I would want to see Russell Branyan in the lineup. Almost nobody hits them farther.
Email Post
Labels: brand - collector's choice goose joak baseball cards goose joak tributes player - brad hawpe set - 1997 collector's choice team - rockies year - 1997