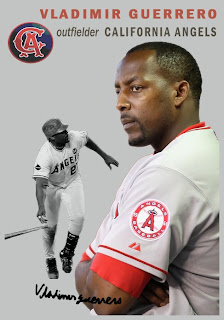 What is the oldest baseball card you own?

Mine is a single card from 1972 Topps, a beat up card of three rookies who were never listed in a Beckett. I doubt it's worth much -- maybe ten cents at most, perhaps less. And who knows -- maybe it's not worth anything! But I like owning it. It looks old, and it feels old. The colors are faded, and the cardboard is frayed. It feels almost like an artifact to me -- like an old penny from 1923 or something. It's not my favorite card of all time, but it's fun to have.

This tribute to 1954 Topps is the oldest tribute card I've done so far. I picked Vladimir Guerrero because he's a recent addition to my fantasy team. He's been on fire in the two or three weeks since I've traded for him.