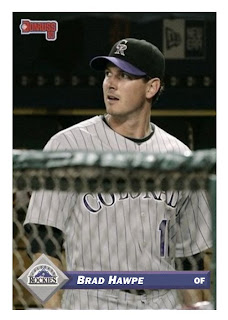 Brad Hawpe is one my wife's two favorite players, the other being Scott Rolen. This is the fourth tribute card I've made of Brad Hawpe. It's the third I've posted though, since I'm posting these out of order sometimes.

We went to see Brad Hawpe in Spring Training this year, but unfortunately Brad didn't play. We saw a lot of Matt Murton instead. Then again, Matt's OK in our book since he flipped a baseball our way.

1993 Donruss brings back a lot of memories. My brother and I probably have complete sets of this several times over. The packs were cheap (about a dollar, I think) and it was fun to collect the inaugural Rockies and Marlins cards.

The design is pretty straight forward, like 1992 Donruss. I like the clean white borders, base-shaped design and tasteful Donruss logo.