Aaron Crow is a pitching prospect. Somehow he fell to the Royals at number 12 in today's draft! Wow!

This should be fun. Aaron is a midwest boy from Kansas who went to college at Missouri. It's almost a homecoming of sorts.

Even cooler is that a few weeks ago, I teamed up with Zach from Autographed Cards to create a tribute card of Crow. Here it is: 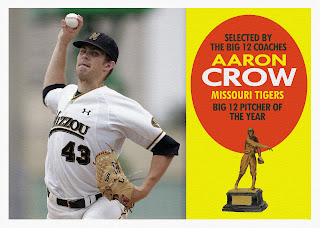 We made a back, too: 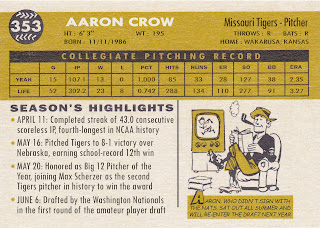 It's based on 2009 Topps Heritage. Loosely, I guess, since we made a few tweaks. One tweak was the trophy. As Zach said, if you take a close look at the one Topps used, "it looks like an Oscar that is holding a sword and melting backwards. Plus, he is standing on a top hat." So we came up with our own.

My favorite part about this card is the comic that Zach found. It's absolutely perfect for Crow, who sat out last year after being drafted by the Nationals.

As you can tell we had a lot of fun with this card. We even met up at a game in Lincoln a few weeks ago, where Aaron Crow was on the roster for the visiting independent league Fort Worth Cats. Before the game, Zach and his buddy Dustin were able to get a few of these custom cards signed by Crow, and they were kind enough to give me one of them. How nice is that?! You can read more about it over at Zach's blog and even take a look at one of the autographs. Great work by Zach on this, and he even got the back and the front together with a real card-like thickness. Impressive to see in person.

Hope you enjoy! And many thanks to Zach for the inspiration and great work on this card. It really all started with him.
Email Post
Labels: brand - topps heritage goose joak tributes player - aaron crow set - 2009 topps heritage team - missouri year - 2009