Giving it everything you've got 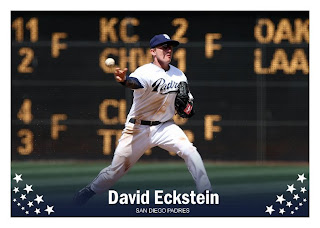 The luckiest WS MVP of all time. That said, he is a fascinating player to watch.

Eckstein's throws across the diamond require a total body effort. You can tell that from the picture on this card.

I like how his jersey is dirty, too. That's a detail I didn't notice at first but was glad that I captured. It's representative of his athleticism and style of play.

Eckstein has been a SS most of his career. This year, the Padres took mercy on his body and finally made him a 2B. I think this is a much better fit for his current skill set. While Eckstein used to be a pretty good defender for Anaheim back in the day, he has regressed a bit in recent years.

Supposedly Eckstein weighs 170 pounds. Not much for a ballplayer, but he's listed at 5' 6". Does that sound right to you? I'm two inches taller and weigh a decent amount less than that. In an effort to validate, I've been searching for a shirtless picture of Eckstein. Perhaps he's ripped!
Email Post
Labels: goose joak baseball cards goose joak originals originals - padres