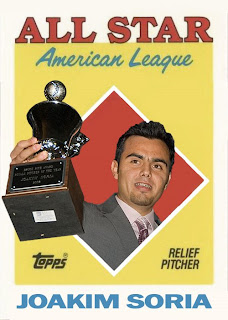 According to Royals beat reporter Dick Kaegel, there's a chance Soria could return to action for Kansas City as soon as today. The news is bittersweet. Obviously I want to see him out there pitching. And obviously I want him to be healthy. But a quick return would nix any chance of him rehabbing in Omaha, which would take precedence over any plans I have this week.

Also, I'm a little worried about running him back out there ahead of schedule. I see this all the time in fantasy baseball. Pitcher has a mysterious injury that they can't beat. After several frustrating weeks, or several frustrating months, pitcher throws a bullpen session and suddenly "feels all better" and is "way ahead of schedule." One week later, pitcher "shuts it down due to increased swelling/soreness/pain in shoulder/elbow/rotator cuff." Pitcher then "has no timetable for return" and "may be out until after the All-Star break/rest of the season." I really hope that's not going to be the case with Soria, who has been throwing with more of a sidearm delivery this year, which worries me.

This card is a tribute to 1988 Topps. Growing up, I thought these All-Star cards were pretty hideous. Come to think of it, most All-Star cards that come to mind right now were pretty hideous. The other ones I'm thinking of are the 1991/1992 Score "big head" All-Stars. Wow were those bad. I've been wanting to do a tribute card of that variety for a while now but can't seem to find the right look in Photoshop. Maybe someday (as you wait with bated breath on that one I'm sure!)

The photo is from this offseason. Soria is receiving his trophy for "Royals Pitcher of the Year," which in my opinion was very well deserved. I think his chances of repeating this year are pretty slim though. One of his teammates is off to a decent start.
Email Post
Labels: brand - topps goose joak baseball cards goose joak tributes player - joakim soria set - 1988 topps team - royals year - 1988