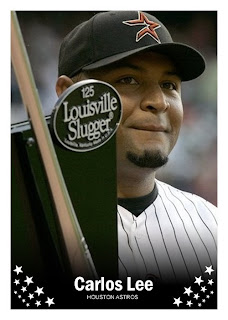 Unfortunately I will always remember Carlos Lee for this train wreck of an ad promoting ESPN fantasy baseball. Just skip to about 40 seconds in, where John Kruk sings that "(he) just drafted Carlos Lee," and a bewildered Carlos Lee steps out of a computer screen. Pure carnage. Then there's all this other weird stuff going on in the background I don't even want to speculate about. Perhaps they spent all their time on this promotion instead of their software, seeing as ESPN flubbed up the entire first week of the season. I actually ported our league back to Yahoo that year and added up our combined statistics manually. Not something I want to revisit, and we haven't gone back to ESPN since. In fact it was the only year our league was outside of Yahoo. 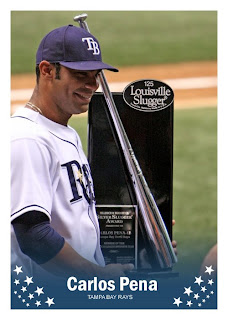 Carlos! My new first baseman. And in the 13th round, no less.

By comparison, Adrian Gonzalez hit .279/.361/.510 last year. In our OBP/SLG league, that's essentially the same as Pena's entire stat line from last year. And Adrian was taken in the 3rd round of our draft. Which is a fine pick, especially if he gets traded -- but Carlos sure seems like a bargain ten rounds later for essentially 95% of the production (with upside).
Email Post
Labels: goose joak baseball cards goose joak originals originals - astros originals - rays