I want to share some of the great cards I've gotten through the mail recently.

First up, Mike from Addicted to Wax pulled a really nice Scott Rolen and thought of my wife, since Rolen is her favorite player. Mike sent it along, no strings attached, and it arrived a couple of weeks later. 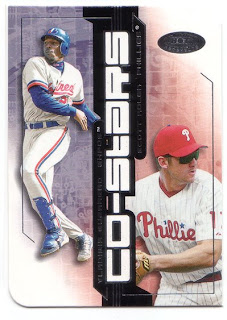 It's a very interesting card because two of the corners are rounded, like a credit card or something. It's also nice to pick up Vladdy in an Expos uniform. Nice little side bonus! Val was very happy with this card, and we've had it out on display. Thanks Mike!

Next, I won a contest so to speak, being the first to comment on a post over at Autographed Cards. Zach had doubles of a Henry Rodriguez autograph and offered to send one of them out if anyone were to claim it. I frequent his site quite a bit, so I had a pretty decent chance at it. Low and behold, I got it! 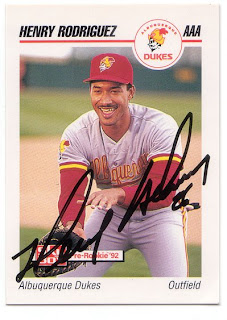 I'm a sucker for posed shots like this, especially when guys are hamming it up like Rodriguez is here. Nice autograph and beautiful uniform, too.

Next, I got something that totally blew my mind. 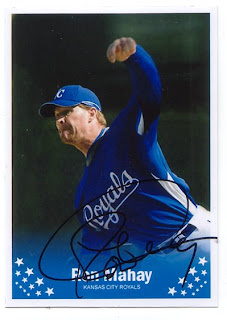 Totally got me. As I told Zach from Autographed Cards, who sent it to me, this instantly becomes one of the elite cards in my collection, probably among the top five. Beautiful autograph, and Zach did a phenomenal job getting the card printed. It looks phenomenal. I couldn't believe how sharp it was, really. Take a look for yourself by clicking on the scan above.

Zack also included a note explaining how he got it signed, which was awesome. Apparently Mahay was taken aback by the card and had to ask Zach where he got it. So Zach casually told Mahay about the Goose Joak Originals set. I got a big kick out of that.

But it gets better. Reading Zach's note, I knew there weren't many Mahay cards to begin with. However, I had no idea there were only two major league cards of him in existence. Zach later explained via email that Mahay was a strike breaker back in 1994/1995. So correct me if I'm wrong, but that likely means he's not allowed in the MLBPA. So that explains the shortage of Mahay cards. Well Ron, the Goose Joak Originals set has a card of you, and the GJO Cardboard Box has another two of you. So you're well represented here, MLBPA or not!

Anyway, if you can't already tell, this was quite an amazing gift from Zach. Awesome signature, awesome story, everything. I know I've already told you, but Zach, thanks so much.

It's amazing how thoughtful the baseball card community is.

Oh yeah, and then there's this other little thing I got yesterday. A series of packs from Brian of Waxaholic, now a fantasy baseball league-mate as well.

Some great packs, really, right around the sweet spot of when I started collecting.

And there is a note attached to the 1991 Donruss that says "enjoy...but open this one last"

My heart is starting to beat a little bit faster. Why would he say that...

ok, so let's open the others. 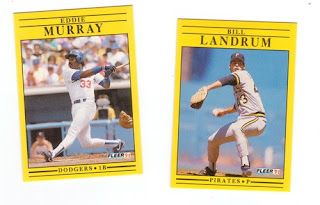 Nice pack with Murray. The Bill Landrum is a really cool shot, getting some serious torque out of his windup. So is the Murray actually, getting extension on a big follow through, body spread wide, standing on his front heel and his back toes. 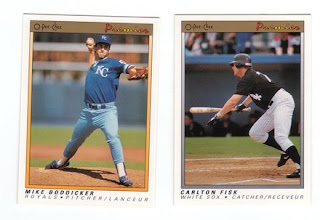 This set is PREMIER so there are fewer cards in the pack. Nice loot though. 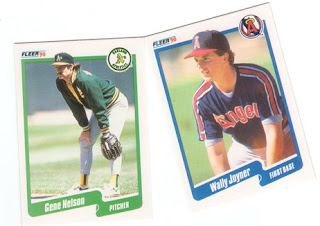 That Kevin Maas would have been quite the pull back in the day. I think he was even on the cover of Beckett.

And finally, with my wife watching, we bust open the 1991 Donruss pack. 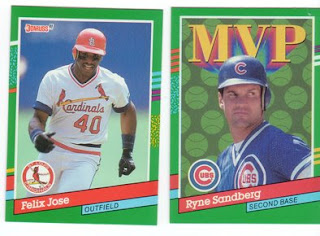 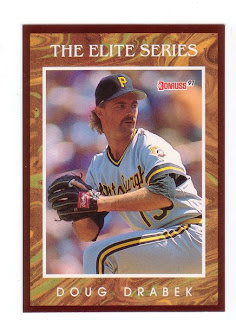 Oh my gosh!!!! I just pulled a flippin' Elite Series out of 1991 Donruss!!!! My holy grail of insert cards! This is the one I've wanted to pull above all others.

Brian may have added a little bit of luck to this pack, eh?!! Wow.