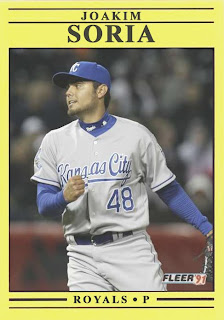 Beso Yogurt manager Goose Joak finally ended his media boycott Sunday, though he declined to answer questions about the health status of his prized closer and favorite player, Joakim Soria.

A half-dozen reporters from print and radio surrounded Joak's cubicle after Saturday's blown save by Todd Coffey, seeking his reaction to earlier comments that "Coffey really is for closers" and that "you can't spell Edwin Encarnacion without win."

In a brief discussion with reporters attempting to clear the air, Joak complained about the heightened expectations in 2009, comparing this year to 2005, when he endured a rocky fall from grace following back to back championships.

Though Joak didn't elaborate on why he was upset, he suggested the media were focusing too much on his lack of runs, which were already 42 behind the league leader.

Joak stormed off, but returned a few minutes later and told invetigative reporter Gareth Keenan that he was upset about a feature story from 2007 in which he was quoted as saying "Ian Kinsler is a horrible, all he wants to do is hit fly balls, what a joke," as well as quotes such as, "he's no Chase Utley Jr."

Reporters once again converged around his cubicle, but Joak brushed them aside, instead calling over a reporter from sports.yahoo.com/mlb/fantasy to vent in private.

"I'm a positive person, an upbeat person," Joak told the Web site. "I'm trying to focus on what I'm trying to do here. My players are behind me -- well, everyone except maybe Cliff Lee -- but the more my pitchers suck, the more my keepers put up sub .300 SLG, the more things spiral out of control. And that's when you start doing crazy things, like dropping Mike Lowell the day before he puts up 6 RBI against New York."

He also told the Web site he's not close to a deal for Jimmy Rollins, despite numerous rumors to the contrary.

Asked whether Joak's general moodiness had been a distraction to the team, the team's former golden child, Josh Hamilton, replied: "I have no idea. I'm just focused on striking out as much as humanly possible right now."

He then added, with a shrug, "But it's hard to keep up with Chris Davis."