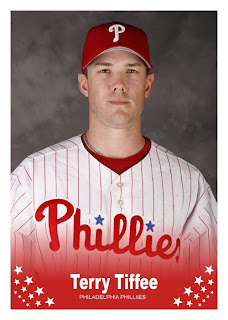 A few years ago, Terry Tiffee was the lowest ranked hitter in all of Yahoo Sports Fantasy Baseball.

Speaking of Fantasy Baseball rankings, I'll be posting my season preview on Saturday afternoon, concurrent with my keeper league draft.

My two favorite fantasy baseball predictions of all time:

- In 2007, if you sorted by SLG% in ESPN's predicted stats, none other than John Mabry was at the top. You just wonder how they came to that conclusion.

- In 2006, Baseball Prospectus assigned every pitcher a "breakout rate" and "collapse rate."

Anyway, Zack Greinke was forecasted to have a 0% collapse rate, with a baseline pERA of 3.83. They proceeded to then write, "We have seen the future of pitching, and his name is Zack Greinke."

Never saw any mention of it in the 2007 season preview.