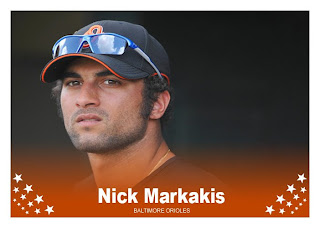 Phenomenal card! I love poses, and this is a great one. As soon as Mark sent it, I knew I wanted it to lead off my next post.

Here Nick wonders to himself...am I going to produce first round value out of the fourth round?

Doubt it? How do these projections look to you (courtesy of FB365):

How about these (courtesy of FB Hot Stove):

It's not a sure thing, but Nick may very well be the 27th best player in fantasy baseball this year. 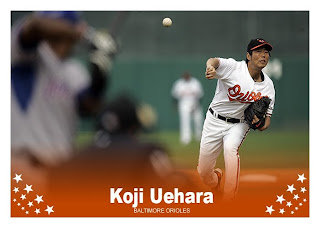 I asked Mark if Koji was going to be the Orioles' 3rd or 4th starter. He said yes, probably, but then admitted they're not sure who their number 2 is going to be. Awesome shot of Koji in early action with the O's. 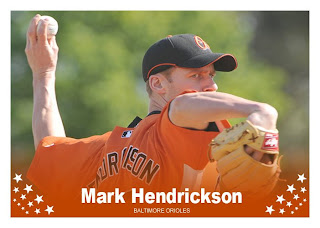 You know, does anyone else think of this guy as being in his mid to late twenties? Maybe 30, 31 at most? That's what I thought. But no. Hendrickson turns 35 this year. 35! That's just 1 year and change younger than Pedro Martinez!