Yes! It's time to play some fantasy baseball. Draft day has arrived! 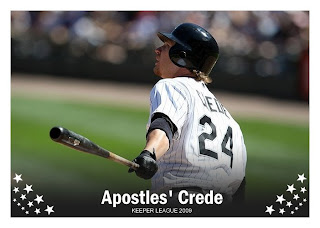 Here's the 2009 Season Preview, Goose Joak style. More than anything, these are my draft notes and potential picks going into the year.

For other good resources, check out:
As a point of reference, I play in a 12 team keeper league. The set up is 5x5 mixed, keep 4 with no round values attached. 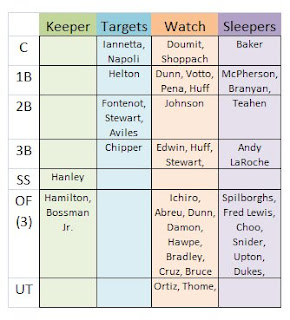 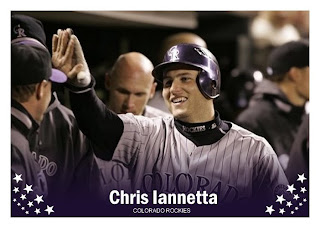 A deeper position than last year. Not a lot of bankable top shelf talent, but also not a black hole after round ten.

I drafted Joe Mauer in the 5th round. We play OBP (instead of AVG) and SLG (instead of HR), so I was very happy with that pick. He was an on base machine.

I would consider going after him again, but it sounds like there are injury issues that could linger. With injuries looming, and at a 4th-6th round cost, I will likely pass.

Mike Napoli or Chris Iannetta. Both excelled in limited PT last year, particularly Napoli. He is always an injury risk but put up Ruthian numbers and comes a lot cheaper than Mauer. Chris Iannetta on the other hand was a target of mine two years ago. This may be the last year he goes at a discount.

Either guy should be fresh for the picking around round 10 or later, particularly Napoli, who could go closer to 20.

Ryan Doumit seems a bit under the radar.

I'd also take a whiff of Jorge Posada as an endgame pick if nothing falls my way. I know Charlie hates this idea, but I really think Jorge's got a way to fall from his '07 season before he becomes truly unproductive. As a replacement level option I'm OK with him.

Kelly Shoppach is interesting but I have been threatened by my wife not to take him. 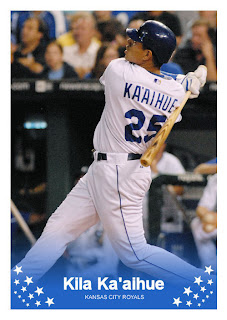 I drafted Billy Butler. Didn't work out so hot. Maybe somebody to come back to in a year or two.

Eventually I wound up with Aubrey Huff and things worked out just fine.

None, really. Pujols, Miggy, Howard, Tex, Berkman, Fielder and Youkilis are all keepers on other teams.

Of the mid-level players, if somebody like Votto or Dunn falls to me, I may bite on them at the right price. Dunn seems to wind up on my team pretty much every year so I'd be OK with that.

Todd Helton, bad back and all. He can likely be had for next to nothing and is having a fine Spring Training. In our OBP league he may be just as valuable (OPS-wise) as somebody like Adrian Gonzalez, who is more SLG heavy but comes up shorter in OBP.

Either way I think he offers high upside at a low cost, and if it doesn't work out, somebody will likely emerge.

In addition, Dallas McPherson, Russell Branyan and Gaby Sanchez are three names that come to mind. Kila Kaaihue needs an opportunity to play before he's considered a serious sleeper of mine. 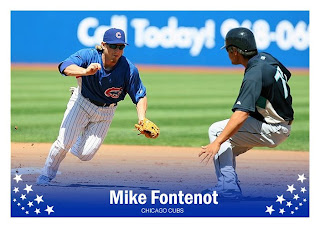 I kept B.J. Upton. Worked out fine. Traded some power for speed and got a pretty good return. The drop in AVG didn't hurt since we use OBP, and his drop in OBP was insignificant (.003).

This year I'm keeping Upton, but I can no longer play him at 2B.

Mike Fontenot. Sweet Lou has more or less given Mike the starting job. Which is music to my ears, as I've had my eye on Mike all offseason. Yes, he's a bit old, but he had no issues with L/R splits last year. He also draws walks and hits for gap power. Case in point: In limited play he approached the magical .400/.500 OBP/SLG thresholds, and he did it with a reasonable .305 AVG. Which is great. To feel confident about sleepers, I usually like to see a 70-80+ point spread between AVG and OBP, and Fontenot is right there.

That said, even if I'm wrong about Fontenot, think of the cost. Fontenot can be had in the 16th round or later -- shoot, he's ranked 869 by Yahoo -- so I'm looking at him as a great value towards the end of our draft.

Joaquin Arias. Playing time is an issue, but he might be a nice bargain play if I miss out on all other signs of life. I think he's a little more projectable than I originally gave him credit for in an earlier post this year.

I've been on the Kelly Johnson bandwagon since he was an OF. Some feel this could be his breakout year. Maybe I'd like to be a part of that.

Also, Mark Teahen has been having a terrific Spring Training and could land the starting gig with KC. Not a bad thought. 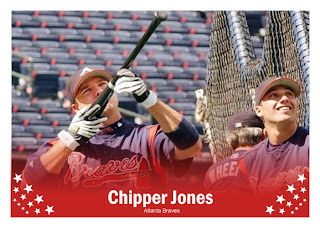 I've heard some analysts say 3B is a weak position this year, but I just don't see it.

Even saddling him with replacement level performance for 30+ games (during his annual DL stint), he's still about as valuable as Alex Rodriguez in a full year (without the steals,

I didn't protect Chipper as a keeper this year, but I'm hoping I can snag him back in the draft relatively quickly, even as high as the fifth round. I may get him, particularly with the WBC injury fresh in people's minds.

I'm a little worried about getting him past Brian of Waxaholic, though, who is new to our league. Chipper is his favorite player.

Andy LaRoche has put up absurd minor league numbers. I'd like to think he could break loose at some point. I'm also keeping an eye on McPherson and Branyan.

Ian Stewart has power, patience and a little speed. He'll turn 24 this year. And he plays his home games at Coors field. AND he qualifies at 2B. If he can find playing time, I think he'll be a great asset.

How about Edwin Encarnacion? He's a perenial sleeper, and this may be the year all the chips fall into place for him. He's a nice mid-draft fallback plan if I don't get Chipper Jones.

A number of other players would be nice to land at a reduced price, such as Garrett Atkins (the most crushed hitter in fantasy baseball?) and Aubrey Huff, particularly because they qualify at 1B as well.

It would be nice to see Scott Rolen have a bounceback season, but I'm not holding my breath. Same with Alex Gordon's long awaited breakout. 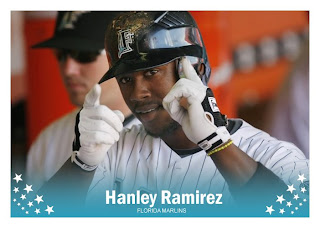 I kept Hanley Ramirez. I'll do the same thing this year. 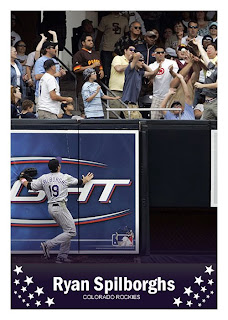 I then drafted Hunter Pence in the 6th, Josh Hamilton in the 8th (accidentally, no less), Travis Buck in the 15th and Lastings Milledge in the 16th.

Two great players and three not so great players. But as my wife has taught me, outfielders seem to come out of nowhere every year. Last year it was Denard Span, Shin-Soo Choo and many others.

This year I'm keeping Josh Hamilton and B.J. Upton. I don't like to fill so many outfield spots right away, but they are likely to be top-tier players.

Ryan Spilbourghs is a favorite of mine. So is Fred Lewis. I think both can be had for very little expense and project to be decent, under the radar power/speed investments who will also get on base a fair amount. Shin-Soo Choo is still very much a sleeper in my opinion.

Bobby Abreu, Johnny Damon and Mike Cameron seem to hang around drafts longer than they should. I'll keep my eye on these three and snag one (in that order) if the right opportunity presents itself. By no means targets, but guys I'll be keeping an eye on.

I'd also bite again on Adam Dunn if the price is right. Like Dave Bush, he seems destined to wind up on my team year in and year out. 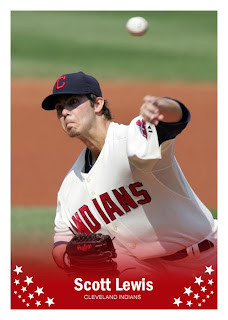 I was also gunning for (but just missed out on) John Smoltz.

So I guess you can see the pattern.

Easily my favorite target this year is Ricky Nolasco. A stunning master of the K/BB ratio. He's going in the double digit rounds. I may reach just to ensure I get him.

I also like Zack Greinke, Cliff Lee and Sean Marshall, and probably in that order (relative to their ADP).

Bedard, Gallardo, Randy Johnson, Kevin Slowey and John Smoltz are all on my radar. Erik Bedard would make a really nice play, but I think he'll go earlier than his ADP. He's also walking quite a few guys this spring.

I always end up with Dave Bush at some point. Huff and Hanson would be nice at some point if they're on a big league roster. 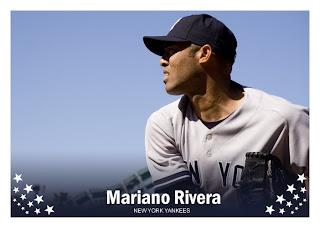 Drafted Mariano Rivera in the 11th round and Joakim Soria in the 12th round. I have no idea how Mariano fell to me that late, except that in our league, there are defined positions for SP and RP (something I feel very strongly about doing, but that's for another day), which usually suppresses the value of closers relative to other fantasy leagues. What can I say? It's more like real life.

Mariano Rivera, to go alongside Joakim Soria If I don't land him, I'll probably go after Frank Francisco, who I consider a great value after round 12. His rate stats were exceptional last year.

Carlos Villanueva may start the season as the Brewers' closer and has SP eligibility in Yahoo.