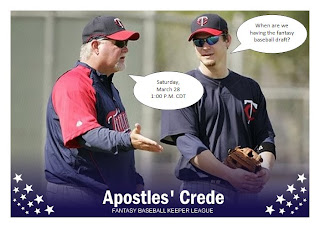 We're replacing one owner in my keeper league this year. If you are interested in learning more, please let me know.

I'm looking for somebody who loves baseball and loves to play fantasy baseball at a high level. Most of us have been playing for a long time. That said, we do have a lot of fun (why else would we do it?)

Last year every single person was active the entire year. So suffice to say we have a really great group of people!

Keepers: Keep four, no round values attached. You can keep each player a maximum of three consecutive times.

About me:
I've played fantasy baseball every year since 1994. I converted the league to a keeper format in 2006.

If you have any questions or interest, just let me know.