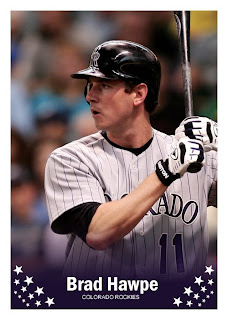 Hawpe is a tremendously underrated player on the Rockies. Quietly puts up good stats every year.

This is a great pre-action shot, and I really like the clarity of the photo. Very crisp looking and you can see lots of detail. I like everything about it. A fitting tribute to my wife's second favorite player! 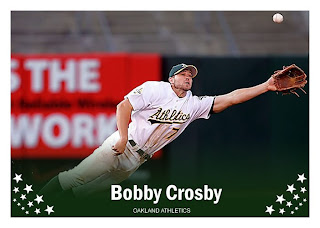 Phenomenal action shot of Crosby. I love that you can see the ball falling into the frame. I think he's going to catch up to this one. 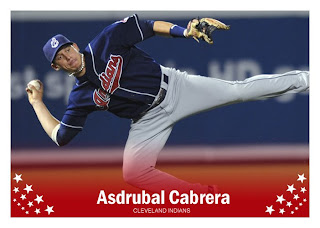 Tyler sent a bunch of awesome Indians cards my way. This one of Asdrubal Cabrera was particularly compelling. I really like action shots where you can see the player's face. This is a really good one. Another great card by Tyler. I really dig the old school Indians threads. I don't remember if they're from the early 90's or late 80's (or even both) but it still looks cool to me. I also love how Perez is just staring you down here, even in the bullpen. Looks pretty intimidating. Kind of Dave Stewart-esque. 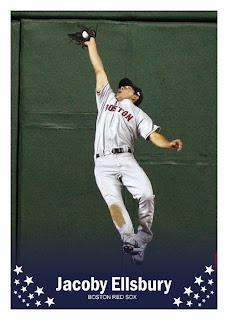 Adam picked out this awesome shot for Jacoby. Gotta say, one heck of a nice picture. I think it frames up really well. You don't always have to see the face clearly! Sometimes the action shot is just that good. 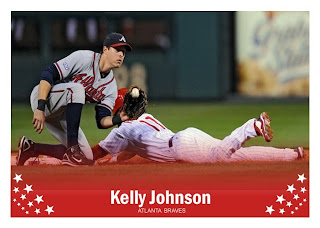 More players should rock the high socks like Kelly Johnson. Great action shot here. I even like the red theme with blue jersey accents. 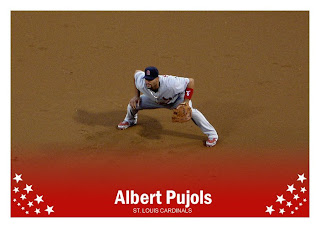 Dang, what an awesome original photo by Zach. Lots of things to dig here. I especially like the angle of the card. You can see how the stadium lights really hit him from all angles and spread out his shadow in several directions. It adds a sense of kinetic to the potential energy of his trademark crouch. It's easy to imagine Albert making a Pujols-esque leap at anything coming his way. 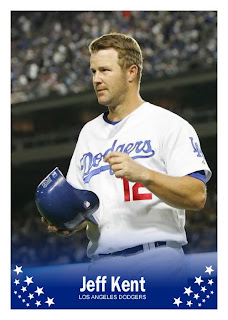 Awesome shot of Kent coming off the field, presumably after doing something halfway decent. Is he about to high five a teammate? Sort of looks like it. I like that you can see the upper deck in the background, too. Incidentally (or perhaps not) it's another night card in Dodgertown!

I know raved about all of these cards, but what can I really do about it? Everyone is doing a really awesome job. It's a real pleasure checking my email everyday and seeing what shows up. It's like opening a pack of cards for free!