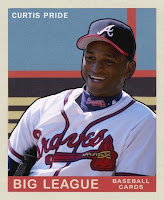 The only game I ever attended at Yankee Stadium was on July 6, 2003.

It was an afternoon game against the Red Sox -- John Burkett versus Andy Pettitte.

I didn't have a particular rooting interest in either team, so I began to scan the lineup cards for a player who might sway me one way or the other.

For whatever reason, I picked up on the name "Curtis Pride." His name sounded so familiar, like I'd seen him play before, maybe in person. But had I really? I guessed he was an off and on Major Leaguer at best.

"Let's root for Curtis Pride," I said to my friends, who were happy to oblige. Anybody can root for Derek Jeter or Bernie Williams -- but we were going to root for the career bench warmer and unsung minor league player!

During every one of Curtis Pride's at bats, we cheered and shouted as passionately as we could. We had convinced ourselves, like fans often do, that the louder we cheered and the more we cared, the more likely it would become that we would somehow inspire Pride to greatness.

This almost never, ever happens. But then a funny thing did happen.

In the top of the sixth inning, we weren't the only ones cheering Curtis Pride anymore. Pride hit a home run to lead off the sixth inning, busting open a tight ballgame and energizing the crowd. We jumped out of our seats, excited beyond belief. We gave him a thunderous standing ovation his entire way around the bases, shouting and high-fiving, refusing to sit down. Then another funny thing happened. We noticed everyone else was doing the same thing! A standing ovation for Curtis Pride! And then...a curtain call! He came out of the dugout and acknowledged the crowd!

We were out of our minds with what happened at that point. We were absolutely convinced that our insane, disproportionate cheering for Curtis Pride had somehow willed him to hit his home run.

If the story ended there, it'd still be awesome, and I'd still have fond memories of the day Curtis Pride hit a home run to appease three of his newest fans. But as we find out, there was more to the story that we had yet to learn.

The next day, reading the paper, we learned that Curtis Pride was deaf, diagnosed at a very young age. And so our delusional myth had been debunked! We couldn't have willed Pride to hit the home run with our cheering because he could not have heard us!

But as we kept reading, there was even more to the story. The game had been Pride's first game back in the Major Leagues since 2001, a layoff of over one year, and his first with the Yankees. Furthermore, though Pride didn't hear us, he sensed the crowd was cheering:

After the homer, a prolonged ovation from the fans brought him back out for a curtain call. Because he could not hear the cheers, he had to be told to go out by Torre and the Yankees' bench coach, Don Zimmer.

Pride said he could hear them "a little bit ... (as) ,,, "vibrations," but he had no idea how loud the fans were or that they wanted him to take a "curtain call." The Yankee manager pushed him out of the dugout to acknowledge their applause. Pride said this was a "very emotional experience" and that he had "teary eyes."

''It was a great feeling, coming out on the field and seeing all those fans,'' he said. ''There were 55,000 people. That's something I never thought I'd see again. I never could have imagined this. It was like a dream."

It actually warmed my heart to read that. Curtis Pride didn't seem like a multi-million dollar baseball player to me at that moment, and he probably never will again. He seemed like any one of us, completely grateful for and overwhelmed by the game that afternoon. He may not have heard us, but he could feel us cheering for him. And to think we were part of the reason he was so happy.

And that just adds to the coolness of that day. Somehow we were able to interject ourselves into the story of Curtis Pride. It added a wrinkle to the story and somehow gave the story back its surreal feeling that had, just moments before, been brought back to reality.

To this day, the story still has a surreal feeling to me. In some ways I still like to imagine that Curtis Pride was somehow able to hear us cheering for him. And even if he didn't, he was able to feel it, and maybe even imagine it.

The card I've featured for Curtis Pride is in the style of 2007 Goudey. Goudey is a great set, particularly the 2007 edition, and makes the players stand out in a comic book sort of style (the black outline, the passive backgrounds). It seems appropriate then that Curtis Pride would appear against a backdrop that almost seems like fiction, which is why I chose Goudey for his tribute card.