Caught up in the Matt Wieters Hype Machine 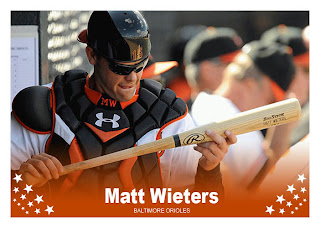 Projected to have a slash stat line of .311/.395/.544 by the notoriously pessimistic PECOTA projection system, Wieters hype has broken out all over the interwebs. One of the newsblogs I frequent, Baseball Primer, is particularly high on him. It has become a running joke of sorts. Here are some of my favorite user comments about Wieters:

Q: What's the difference between Matt Wieters and Superman?
A: Kryptonite can stop Superman.

Bob Gibson admits that the inside of the plate belongs to Matt Weiters. (Nice one)

Every love song ever written has been about Matt Wieters.

Matt Wieters is accepted by the U.N. as a sovereign nation and will participate in the 2013 WBC.

Matt Wieters took batting practice this morning. There were no survivors.

Scientists now in consensus, Global Warming is not man-made, it is being caused by Matt Weiters.

Matt Wieters is so ####### good that even his intangibles are tangible.

Matt Wieters can't have a roommate on the road, because his snoring generates the universal chord, which turns people into pure energy.

Once, when his team was losing by four runs in the bottom of the ninth, Matt Wieters hit a six-run homer to win the game.

Matt Wieters can make an omelette without breaking any eggs.

Some years, Matt Wieters fills in for Santa Claus.

Wieters is a lock for Rookie of the Year, MVP and Nobel Prize for Physics.

Only one Nobel Prize would be a disappointment. I wouldn't want to be the Nobel Prize committee explaining to Matt Wieters why some chump got the Peace Prize, especially considering that Wieters' tears bring plants sprouting from salted earth. Or they would, if Matt Wieters ever cried.

The presence of Wieters has Bob Feller saying that baseball is better now than back when he played.

Matt Wieters cannot tell a lie, because He just changes reality to fit what he says.

Matt Wieters is the man behind the curtain.

Matt Wieters can count to the highest number there is.

Wieters is so humble, Jesus wrote a testament about him.

The Wieters Testament was declared to be heretical by the Catholic Church, due to its conflict with the doctrine that only God is perfect.

Matt Wieters has found both Carmen Sandiego and Waldo. And killed them.

I had something hilarious to say here, but Matt Wieters thought of it first.

Matt Wieters once baked a humble pie that fed all of Ethopia for two years.